How do you know when to employ a chemical hardener? . All the concrete is different, and it is best to assess each substrate before you employ a densifier. Some say that the only time to employ chemical hardener is throughout the polishing phase after the stain or dye was implemented, as well as after the 200 grit resin bond diamond has made its passes. The logic behind this is that by applying the densifier from the order, the color will be locked in. This can be true with regards to hard concrete, however it isn’t the exact same for soft concrete. 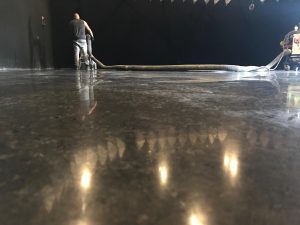 Probably the most crucial things to contemplate when applying a densifier are to realize the concrete itself. The kinds of densifier are made from potassium, sodium, and lithium silicates, along with the newer kind of nanotechnology and colloidal silicate. In general, a silicate is a silicate and potassium, sodium and lithium are the supports of the silicate that delivers the densifier that allow it to respond with the concrete.

The exact chemistry of densifier function is complicated, but silicates respond with the remaining calcium hydroxide in concrete, which stems from the hydration process. Adding the silicate into the structure and capillaries of the concrete creates a substrate that’s impermeable with a coating which is less predisposed towards dusting.

we’ve state of the art equipment and a team with many years of experience. We are premier contractor serving the Orlando, FL. Give us a call or send us an email for your custom concrete finishing needs today!

Get a FREE QUOTE
on Your Commercial
Flooring Project